Andrea Bocelli’s music has been an integral part of my family’s life; ever since my grandma’s  surprise birthday, where I slaved for 2 weeks creating a video montage to play along with a song dedicated to her called “Vivo Per Lei” or in spanish “Vivo Por Ella”- (because he’s amazing, he speaks & sings his songs in like 5 diff languages.)- Sad to say the montage I made was on VHS, at my grandmother’s house- and unfortunately I can’t find it to upload :(.

The song can be translated to be a tribute to music- but because it’s a feminine noun “musica” in both Italian and Spanish- it is addressed in the song as her/she- which can be a tribute to a woman in your life… my grandmother. Listen in Spanish OR Italian.

I Live For Her: “I live for her, you know, since the first time I met her. I do not remember how, but she entered within me and stayed there. I live for her because she makes my soul vibrate so strongly. I live for her and it is not a burden.”

His music touches a part of your soul that you sometimes forget is there; a part where emotions can’t be controlled. We’d never seen him live- until we’d heard of his US tour of White Christmas. We were days away from the MSG and Prudential center shows- so the next available on the East Coast, that didn’t cost an arm and a leg for tickets, was in Boston- TD Garden.  I bought the tickets for mom and I, and drove out for a much-anticipated day & night; drove back home that night (crazy, I know.) 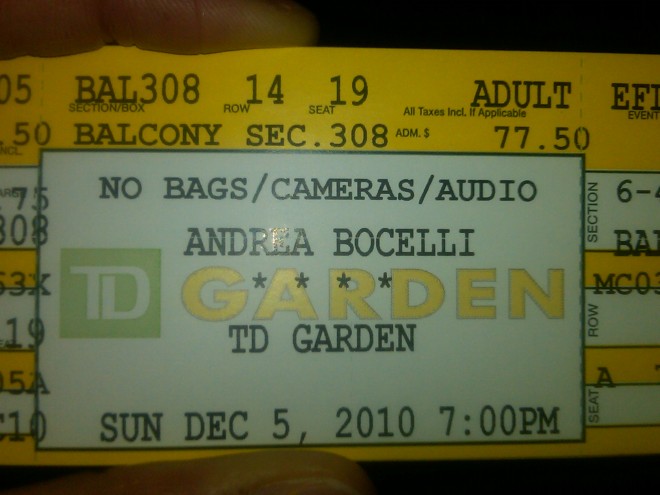 Long story short: I got to know Boston a bit… 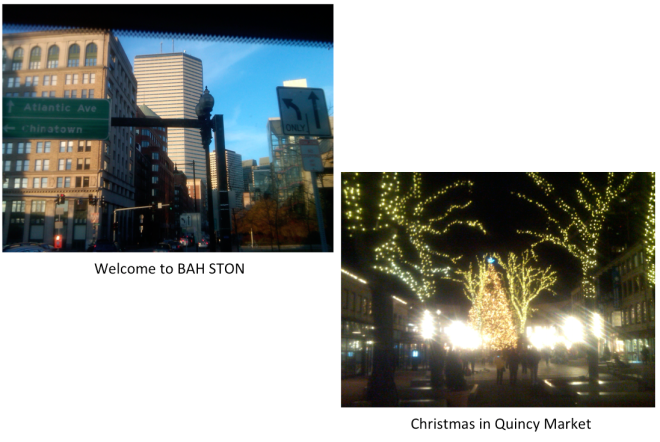 …in the freezing December temps…

…but the honor of hearing him…we cried like little girls. His voice, his music, his orchestra and special guests, were nothing short of the most spectacular ensemble I’ve ever seen. Here’s a taste of his show at MSG>>, singing “Con Te Partiro”….another classic.

Heres to man equivalent to Stevie Wonder in Italian Opera- blessed with the tenor voice of an angel. I hope to see him again soon, very soon; maybe even in Italia.