Grenade in Italian is “Granata”

O dioooo! So it was leaked by TMZ and confirmed by MTV: Jersey Shore Season 4 is headed to Italy. Where they’ll stay, and what in god’s name they’ll be doing is unknown, but it is confirmed they’ll be crossing the Atlantic and grace the boot with their drunken hot madness :)! 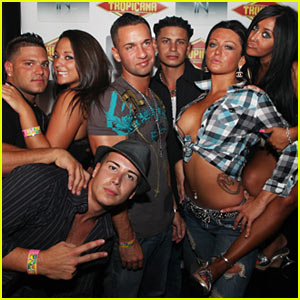 I told a couple of friends of mine about the big news, and a very funny friend of mine… Meghan, basically scripted the season as follows:

“If italy sent over a bunch of obnoxious, ridiculous looking transfer celebs for a party abroad program here in the US, i wouldn’t watch it. i wouldn’t care.

ugh and you know there’s going to be all those token shots of them on a gondola eating cannolis and shit. then in their commentary they’re going to try to convince us that they have something to do with the culture, that they’re “coming home”. then there’s going to be soooo many hilaaaaarious mix-ups because they don’t speak the language! then snooki’s going to throw up everywhere all over italy and make me never want to go visit.”

Too funny! They are to begin filming Spring 2011. Stay tuned… I’m excited, are you?