Last night was my first day of the wildly talked about Bikram Yoga, the Bronx location (231st). I’ve been hearing about this type of yoga for some time now as a few of my friends have tried it.

If you don’t already know, every class (suggested to be done on a daily basis) is a 90 min class composed of the same 26 poses, in 105 degree torture chamber :). 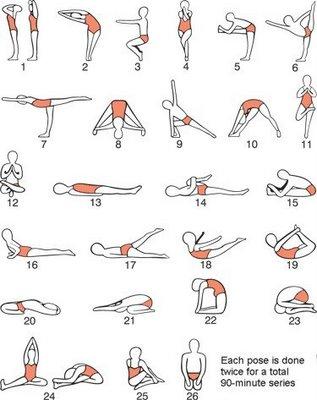 I decided to start with no expectations and wearing a bit too much compared to what I’d been told to wear by friends. I bought into the 7 day unlimited for $25, which is only for first-timers. My experience in bulleted format:

– Never have I ever sweated this much in my life.

– If I was EVER even close to sweating that much, I would have definitely submerge myself in water (pool/beach).

– DO NOT wear cotton clothing, check out yoga gear on Athleta.

– The hardest part is getting used to the heat, as once you’re warmed up the positions aren’t as difficult as they seem.

– You better not be shkeeved by bare-foot-ness, because shoes aren’t allowed once a-couple-of-feet into the main studio area.

I plan on going for 15 days straight, as that’s the ‘prereq’, if-you-will, to sign up for the 30 day challenge, which, according to Bikram is:

“Never too old, never too sick never too late to start from scratch.” – Bikram