My favorite morning crew- Fox 5’s Good Day New York, Rosanna Scotto & Greg Kelly! Their chemistry is matchless, and they make my morning fly by. When I have time I usually tweet with @RosannaScotto– TOO much fun! I’m dying for Greg to get on it with the social media- in the meantime- I think Rosanna probably pushed for a page on FB for the two of them, check it out.

Moreover, Greg played a great April Fool’s joke on Rosanna, watch the whole thing, he had her fooled that he was interested in Twitter & Snookie…. so he could scare her when she turned back with this mask on!!

They’re also on some OOH ads- HYSTERICAL. Every time I see one, I die, and tweet it to Rosanna! Are you following her? @RosannaScotto.

Keep up the great work guys! 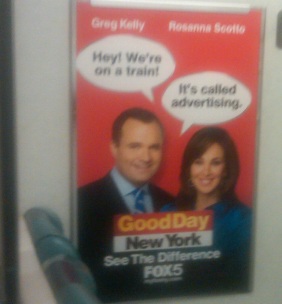