Anyone wonder what’s happened to the days of traditional, creative, Halloween costumes? The days of cutting two holes in a sheet and being a ghost?! (TY @peggyorenstein) Or even just a well thought out idea, like a clown, making balloon animals, face paint, clown shoes? I really think costumes these days are simply taking a turn for the worst. In scrolling through my newsfeed over the weekend through last night, some of these “costumes” are just too much.

I’m not going to be a hypocrite because I dressed up (or, well…down) one year as a Burlesque Queen, but quite honestly, I didn’t just wear a corset and ruffly bottoms I went all out because I wanted to really embrace my idea; old fashioned earrings, studded brouche in my hair, long cigarette holder etc. That’s where I guess I’m going with this…what’s happened to the days of really, truly dressing up as something else? Trying to be/look completely different? To scare or make people laugh?

No. Instead, think of anything in the world, any occupation, any fictional thing, even anything in nature… tag “sexy” before it and you’ve got yourself a costume. Simply show lots o cleavage and boobage, as well as lots o legs and butt- and by god you’ve scared NO ONE (in most cases). You’ve simply achieved an attention-getting night, sans probably really looking or truly feeling “sexy.”

Take these two costumes for example- a “Sexy Show Girl” (left), and an “Adult Sexy Costume” (right). The one on the right… ISN’T ANYTHING but a fitted onsie that says “Halloween” WHYYY is she carrying a knife?! 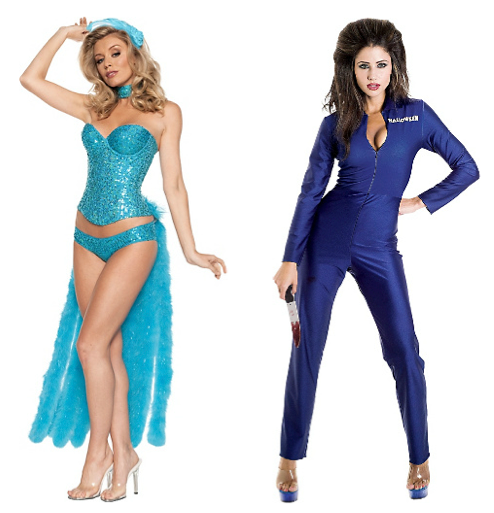 …and if I were to be a Show Girl for Halloween, I think I’d try look more like this:

yes, that’s lots of leg, and butt, BUT it just seems more creative and less “sexy” to me. Again, I may just be channeling my inner old soul here- but does anyone agree?

Guess it doesn’t help that the gents don’t mind the stupid generic “sexy costumes”- guys like @ChrisDemarais, who don’t mind at all, and quite honestly, entertain it.

Pretty understandable I’d say. Ladies aren’t leaving ANYTHING to the imagination… why would guys complain? Or is this the norm now in our culture? Why not go out flaunting every asset like it’s up for the taking? Not going to lie, we’ve all seen women out these days going clubbing, their choice of attire isn’t far off from some these “sexy costumes.”

Where ever you sit on the spectrum of what normalcy is in our culture, let’s try and think of the little girls around us, being role models to them, and the scary idea that these costumes are being made for them.

“Listen, I want my daughter to have a healthy, joyous sex life. (Not now, of course — she’s 8 years old! But someday. Like, you know, when she’s 30.) But it’s become pretty clear that a Sesame Streetwalker costume undermines that goal.” I assume she’s referring to the too sexy for kids Katy Perry/Elmo controversy on Sesame Street:

I think, somehow, all the ladies embracing the ‘too sexy costumes’ are all channeling their inner kindergartener, except they know it’s hot and attention-getting, but not harmless.

I really love Halloween, check me out through the years. Last year I really wanted to be Carmen Sandiego but changed up last minute to a Preggo Drinking/Smoking Trailer Park Trash girl LOL. I thought it was genius. YES, there was cleavage, BUT, what trailer park chic doesn’t have her pink bra showing under a ripped wife-beater? I had a beer-can-roller wig on, spoke in a souther accent, wore pink bunny slippers, and pink-press on nails; very thorough, a creative costume idea.

The underlying message here, I think, is that Tinkerbell, for example, was not animated or even RE-animated… with cleavage: