Who Are You Kyary Pamyu Pamyu

Thanks to Metro New York for including this image of “Kyary Pamyu Pamyu” in the Entertainment section this morning. The photo was taken at a launch of the new
GU Japan‘s logo in Tokyo and the editor was about as confused as I was with the photo of girl.

“We’re not really sure what this is all about, but this is apparently a singer…and she was in Tokyo yesterday to launch the new GU logo…again, we have no idea what’s going on here.” – Metro

Meet Kyary Pamyu Pamyu. Obviously I’m curious. Must know who this girl is and WHY because the photo reminded me a lot of the Anime girl that surfaced back in October 2012. Looks like the photo above is nothing to be surprised about as her choice of makeup and hair is no different to her daily outfits and “character” looks.

Think Nicki Minaj, but MUCH cuter and Japanese.

“…[her] birth name is Kiriko Takemura (born January 29, 1993), also known mononymously as Kyary… [she] is a model, blogger, and recording artist from the Harajuku district of Tokyo…

Her official stage name is Caroline Charonplop Kyary Pamyu Pamyu… [and her] debut album, Pamyu Pamyu Revolution, was released in May 2012.”

Her website or blog is entirely in Japanese, but seems very reflective of her personality and image. This is her “Official” FB Fans Facebook page, 46.5 likes, and if you care to follow her tweets?! Join her 1.2M followers over at @pamyurin. Can’t forget about her 52K followers on Instagram @kyarypamyupamyu.

If you haven’t had enough, here are just some of her model shots. I kind of love her because she seems naturally pretty. Unlike Nicki Minaj, who looks completely fake, especially in HD on Idol last night. Woof. 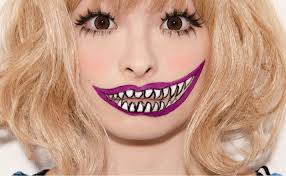