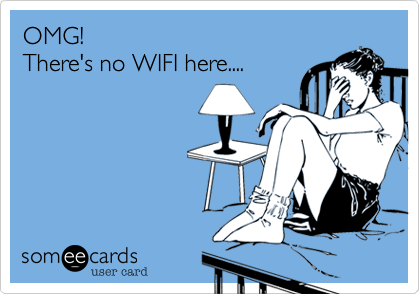 Over a year ago, maybe almost 2, out of the coolness of getting my phone bill paid for, I handed over my phone plan and number to my employee. For those that don’t know, for many years Verizon had an unlimited data plan … you know, back when using “data” (aka streaming music, taking/uploading selfies, keeping FB and Twitter refreshed) wasn’t as big a deal. If you still had your same account/contract from years ago you were a lucky “grandfathered” account that continued to have unlimited data. Get a new contract though and you’re in the middle of a pricing war and of which every little data pull (and total data usage) costs you money.

I had a grandfathered account before I handed it over and now that I pulled my number and got a new contract it looks like I’ll be making up for the months I didn’t have a phone bill because using my data is like breathing. I now have to “watch my intake”, if-you-will, and be the sad person that searches desperately for WIFI to save on data; what has this world come to!

Hindsight, of course, is 20/20 and I regret not thinking it through more thoroughly before terminating that account.

NOTHING IN LIFE IS FREE, PEOPLE. NOTHING.

In other news, I have a pretty new iPhone 6 with a pretty new case that I’m obsessed with. Additionally, even with an upgrade to 4GB from 2GB I’m still paying less than I was when I had the unlimited plan. So I guess it all works itself out.