I love when companies/organizations buyout the NYC Shuttle skinning. I think it’s such a fantastic way to launch a rebrand and/or call major attention to an initiative or CTA.

The latest and greatest skin is for @theNYRangers and the @NHL Playoffs.

Icy blue featuring NYR players’ names and (what looks like) life-size photos of players in action, the NYR organization is promoting and initiating the #NYR #NHLPlayoffs conversation.

While I can’t imagine overdoing the messaging/CTA on these skins is effective (due to the nature of the 2 min. ride of the shuttle,) I think there is major takeaway impressions from a more holistic branding standpoint for the “audience”/consumer/riders.

Brands have taken it even a step further in the past, by people-bombing/seeding the area at Grand Central where shuttle pulls in (IN Grand Central for the next example,) and similarly at 42nd Times Square side of shuttle. The last big buyout was Royal Carribean for their “The Sea is Calling” Campaign.

It was funny because as I was coming through Grand Central I saw a random girl in a skirt and flip-flops walking around… and had no idea WHY. I didn’t even make the connection when I got to the shuttle tracks because I didn’t take the skinned shuttle. I put 2-and-2 together when I saw (and tweeted) these 2 girls on the Times Square side of shuttle:

“@la_suazo: Love the ‘vacationers’ talking to the sea during #rushhour today! @royalcaribbean #theseaiscalling ” 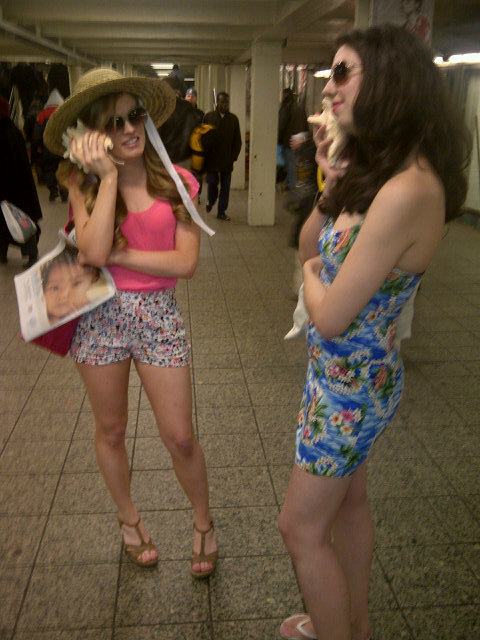 Check out more photos via @RoyalCaribbean.

Keep it up brands! I know I absolutely LOVE the OOO marketing/advertising!